This report was authored by Aliraza Alidina, Darrien Morton & Jenna Wirch and officially released on January 15th, 2020. It discusses wise practices for the relationship-building process between Newcomers and Indigenous Peoples, as well as recommendations for the development of an orientation toolkit for newcomers. This report is accessible under limited copyright protection. As long as this report is accurately and completely credited and not used for commercial motives, you may download, distribute, photocopy, cite or excerpt this document. See English and French versions below :

We have pulled together this calendar of some of the resources that will be operating over the holidays. For additional details on hours and programming for each day, please click on the date of interest. We know that a lot of people struggle, as do those trying to walk along side them. Many organizations however have to close down over the holidays as that is one way they can ensure their staff are able to re-energize for the challenges ahead. Please feel free to share widely!

Hello and thank you for the opportunity to speak with you today.

I would like to begin by acknowledging that I do appreciate having earlier access to tension points in budget discussions than in previous years.  The previous yearly process often seemed quite futile as by the time information was public, it was clear that decisions had been made and there was little to no room for change.  However, it also meant that there was, at least, the possibility of change the next year.  This new process does give us more time but since we are talking about the next four years, it does increase the pressure to get it or as much of it as possible right the first time.  We are also looking forward to an update on how unexpected surpluses and/or deficits will be handled in subsequent years.

To date, to say that the news has been grim is an understatement.  Forecasting generally lends itself to the most conservative goals and this is exactly not what we need from the City at this point in time.  I do understand the current reality on expenses, conditions and revenue sources but as an organization that advocates for change, SPCW looks for opportunity where others might only see challenges or worse impossibilities.  I offer SPCW’s comments today as food-for-thought in the hopes that we, and community partners, can continue to meet with you all and other councilors before final decisions are made in 2020.

We, as a country, are 30 years later and 19 years late in our promise to end child poverty by the year 2000.  I would like to commend this Council for their motion to develop a poverty reduction strategy.  As part of the Winnipeg Without Poverty coalition and one of the lead’s on that project, it was wonderful to see Council responding to the community’s calls for the City to play a larger role in poverty reduction.  Of course, the concerning point of that motion is that this strategy is to exist within existing budgets.  So, here I am to talk taxes and the need to raise them.

As a contributing partner to the Alternative Municipal Budget, I am echoing the call to use our budget as a tool to better address climate change, stagnant economic growth, political polarization and growing inequality. The AMB replaces economic growth with a healthier concept of economic sufficiency, or ecologically sustainable economic development to meet human needs, as measured by Winnipeg’s PEG indicators.

We recommend adding the additional 5% onto the election promise of only 2.33% as that will generate an extra $30 million.  These resources are sorely needed to address the significant social deficits that have been allowed to accumulate by keeping property taxes frozen and so low for too long.  I have enclosed a table that demonstrate how little this increase would cost property taxpayers and by working in a rebate, how it can also work to better support homeowners with low-incomes.  I am not suggesting the $100 rebate as the final number but just using it as an example.  The need for a cut-off level and how to set that would need to be explored.

And of course the other argument for raising property taxes, is that our population growth has not kept up with our land use.  Urban sprawl has increased our need for more infrastructure. 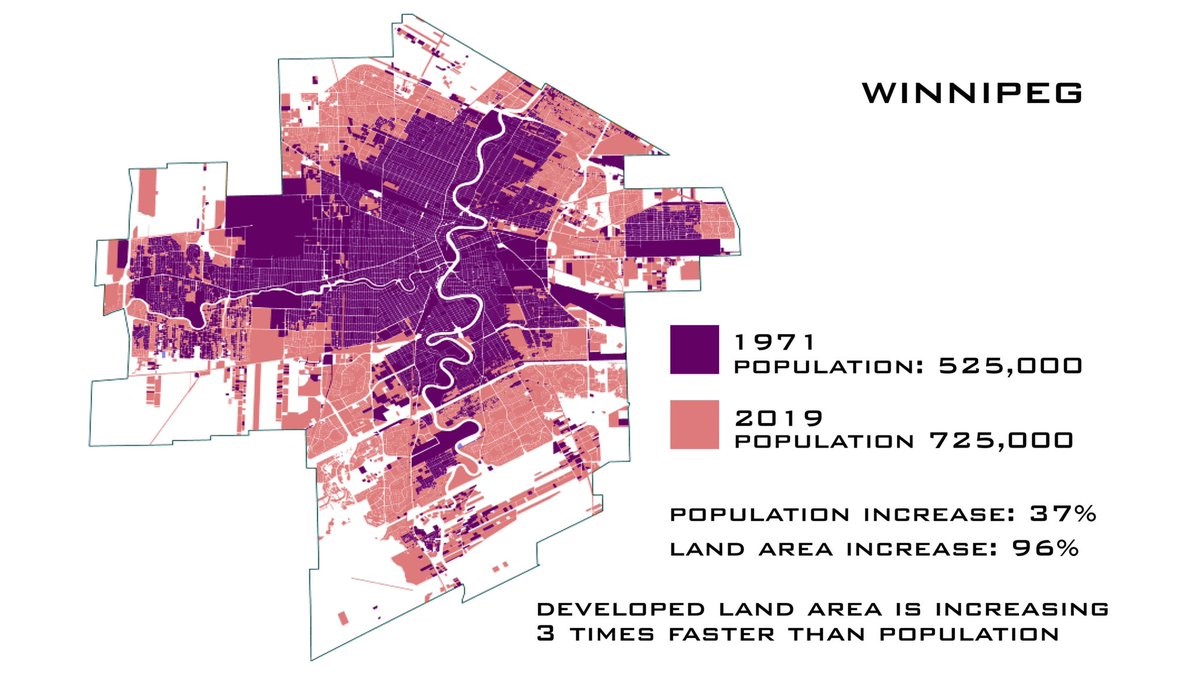 Finally, on this subject at least, the City of Winnipeg Chart below does demonstrate how we compare with other cities.  We will remain extremely affordable with the larger property tax and will be that much more attractive when we have the resources to create a City that is truly inclusive and welcoming. 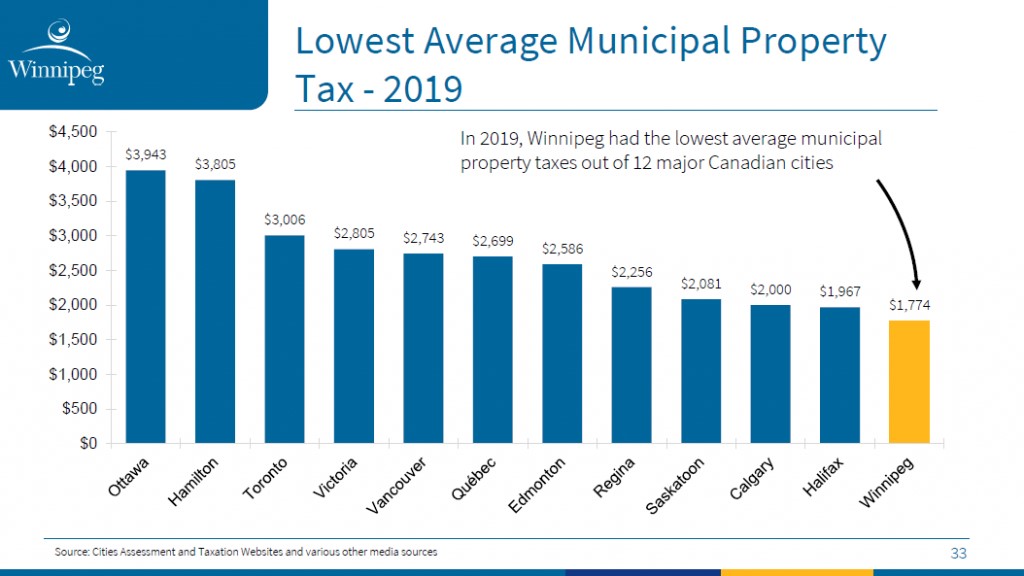 The other revenue sources would be to increase the business tax to 5.22% to generate another $2.9 million, a fee on surface parking lots and increasing the impact fee for gains of $34 million and $5.5 million respectively each year.

In addition, I would highlight a recent report from the CCPA, The High Cost of Free Riding and How We Fix it. This report addresses the issue of bedroom communities. Those who live outside the City but travel in for work or to use City services but are not part of the tax base that pays for them. It suggests a ‘commuter fee’ approach. This is a longer term solution as the province would need to be engaged but it should be looked at as it could generate an estimated $42 million.

And a last chart, of which, I am sure you are all aware. We do have the lowest expenditures per capita of the larger urban centres. 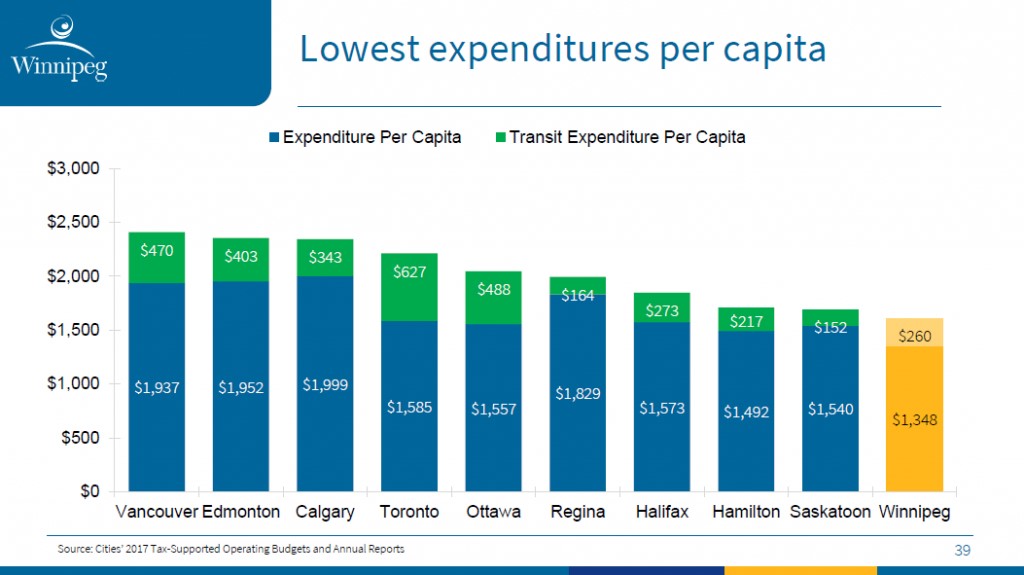 I spoke earlier about the promise to end child poverty by the year 2000.  Just to bring that failure into the Manitoba and Winnipeg context:

Both the provincial and federal government have tried to paint a rosier picture by using the Market Basket Measure.  Campaign 2000’s data is based on the Low Income Measure (after tax).   Research demonstrates that relative measures like Canada’s Low-Income Measure are more comprehensive measures of all aspects of poverty including material deprivation, exposure to harsh environments, social exclusion and stress related to social comparisons and insufficient resources. The Low-Income Measure is much more strongly correlated with the known health, developmental and social effects of poverty.  Our latest report on child poverty by federal riding compares 2015 to 2017 data given that 2016 was the first full year of the Canada Child Tax Benefit.  It has helped but not nearly as much as hoped or promised.

I realize that for many, they do not see poverty reduction as the City’s responsibility.  However, it is your responsibility to create the conditions that support all Winnipeggers as valued members of our community.  The harm done by not addressing poverty at all levels of government is simply too great.

Overall, crime has fallen steadily since 1991 and is still much lower than it was in that peak year.  However, the last four years have shown spikes.  Winnipeg’s 2018 crime index was up 10% from 2017 and is highest in the country.  The previous federal government made sweeping changes to the criminal justice system in the name of being “tough on crime.”  The current federal government has not made any substantial changes.  In 2017-18, Manitoba jailed 19 for every 10,000 children.  8 out of 10 other provinces jail less than 5 children per every 10,000.  Across Canada, we jail 83 adults for every 100,000 but in Manitoba, it is 231 for every 100,000.  Most troubling though is that of all those serving federal, provincial and community based sentences in Manitoba, 75% are Indigenous. From 2007 to 2018, the number of Indigenous men and women entering custody in Manitoba rose by 60% for men and 139% for women.  80% of those we have incarcerated across Canada grew up in poverty, unemployment and lack a grade 12 education.

My point being, we jumped into the rabbit hole of over-investment in enforcement over a decade ago and it has not had the desired effect.  The cost in real dollars, $30 some for a supported housing bed but over $300 for one in jail.

Obviously one major lever is what Mayor and Council choose to invest in the Winnipeg Police Service.  The police budget has grown exponentially in this same last decade to now take up a 1/3 of revenues.  I am not here to point fingers.  The WPS presents its case from their perspective, the tools that they have or feel they need, to play their role.  By and large, the electorate remains convinced that this is the best approach to crime despite the endless research to the contrary.  Successive Mayors and Councils have largely agreed through providing this investment.  I am here to make the point that just like with climate change, we really do need to stop kicking the poverty can down the road.

In closing, I would just like to note that the attached maps clearly demonstrate that we have pockets of poverty throughout our city.  They also demonstrate the strong correlation between poverty and racialized communities.

While I appreciate that Community Services, for example, did its best to spread out the harm caused by a mere .5% increase which is actually a cut when inflation is factored in, through all wards, people who are experiencing poverty will obviously be hit hardest.  They have the least ability and resources to pay for services privately that could and should be provided through public funds.

Cuts and closures to pools, arenas, community centres and libraries will exacerbate poverty driven crime.  Around the world, inclusive societies that support community are also the safest ones.  When people feel they have a stake in their community, they are more likely to engage positively.

As I said, I am hoping that discussions will continue past today and can be productive and solution focused.  To that end, I am here to offer SPCW assistance in public engagement and education.

We can access the necessary funds to do what is needed to ensure Winnipeg is a city that meets the needs, though maybe not all the ‘wants’, of everyone.  Those of us who can afford to pay more need to as we all benefit when everyone feels the full benefit of being in a sustainable, just, equitable and caring community.

Also check out the following maps:

Green Action Centre is hiring a new General Manager for the social enterprise, Compost Winnipeg. Here is the link to the full job posting: https://t.co/ZGKpm7XQiL

Tomorrow, we invite you all to join in this conversation on Indigenous Rights.