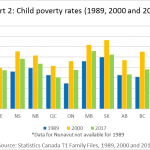 Campaign 2000 is a national coalition that monitors progress and setbacks to end child and family poverty in Canada. It was initially formed to hold the federal government to its 1989 unanimous motion in the House of Commons to end child poverty by the year 2000.

This report is focused on the situation in Manitoba. Even with the federal Canada Child Benefit and using both the federal and provincial governments’ preferred and more forgiving poverty measure, the Market Basket Measure, Manitoba ranked 4th in both overall and child poverty in 2016. However in 2018, there was an increase of 7% in overall poverty and 19% increase in child poverty. The report demonstrates that at this rate it will take 697.5 years to end child poverty in Manitoba.

Happy Monday! Just a reminder that the vaccination age in Manitoba is now 56. ... See MoreSee Less

When this happens, it's usually because the owner only shared it with a small group of people, changed who can see it or it's been deleted.
View on Facebook
· Share

Quick reminder that the next Recognition Counts Webinar sessions will be held on Tuesday, April 20th at 2:00 pm and Thursday April 29th at 6:00pm. Please help spread the word.
Website: http://rcwebinar.seedwinnipeg.ca